Theatre
From the mind onto the stage 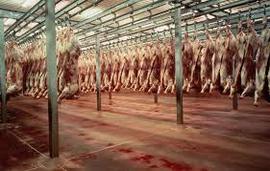 This performance included two actors (Sara de Boer and Jordy Roeten) and was about factory farming.
Isn't it odd that back in the days we longed for easier food production methods, but now that we have them, we long for the quality and value products used to have? That we stopped wondering where our product came from; that our milk came from a cow and not just the supermarket? That we lost the connection with that what feeds us all?

The soundscape was produced by recording sounds of clanging metal, a person sharpening knifes, closing metal fences and other horrifying sounds to create an instrumental experience of a slaughterhouse.

At first I wanted this performance be informative, because my opinion or knowledge can be very confronting and my teachers told me I probably would lose my audience sometime because of this. Eventually the performance ended up as a plea against animal agriculture. After all I was glad that I had not changed anything to please anyone; this vision was mine. I do want people to go back to their roots, to nature, to care and be compassionate to themselves, animals and the planet. My audience was touched, confronted, yet enthousiastic. 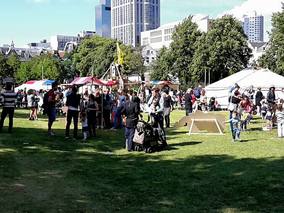 ​A storytelling festival focused on children.  Nearly the same formula as Verhalenfestival Amsterdam.

A month before this festival in 2015 I did a promo together with my great storytelling friend Rik Vuur.

This festival is made for children. Since they listen to stories all day long, the tension in the storyline is very important. I kept them short, depending on my audience, between 10 and 20 minutes. 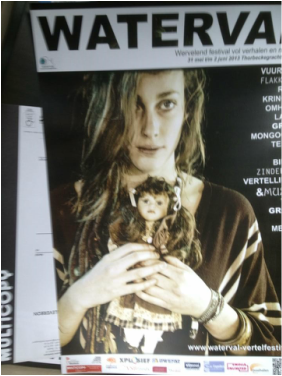 Every year since then I participate in this festival. It is located in Zwolle, on De Verhalenboot and along the canal that surrounds the city. Many international artists perform during this weekend to share their stories of interest. There are no regular stages: performances take place in traditional Yurts.

In 2013 I was the face of the festival, as you can see on the image on te right.